As a Coalition, the RCLALQ has adopted a democratic structure allowing active members to develop all the political orientations of the organization. The RCLALQ also includes support members who, by virtue of their status, make it possible to politically support the RCLALQ in these action plans and serve as a network of allies in its struggles. 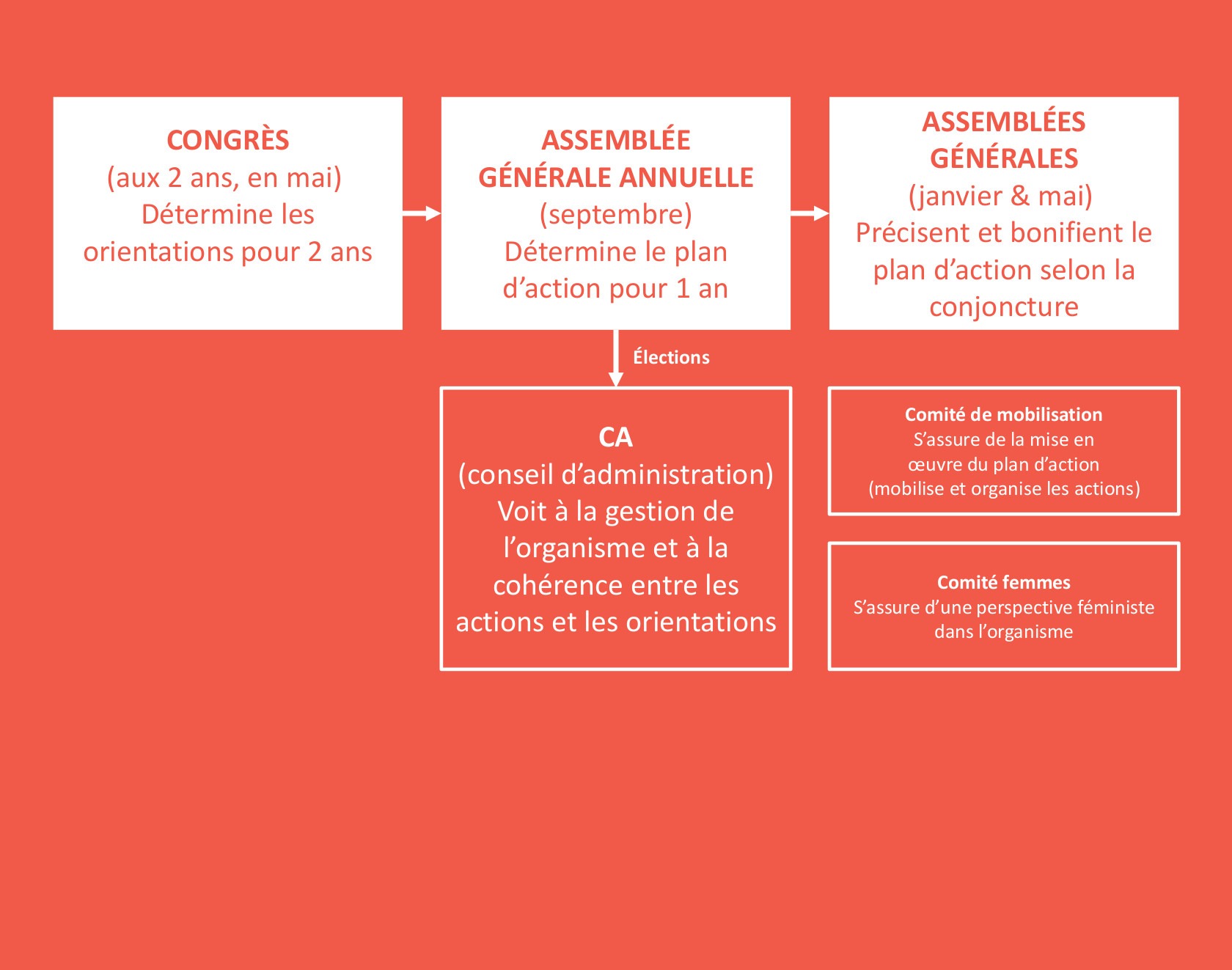 The Structure of the RCLALQ

Congress
The RCLALQ holds a convention every two years in May. The convention determines the main orientations of the Coalition for the next 2 years.

General Meetings
The RCLALQ holds its Annual General Meeting (AGM) in September. The AGM determines the action plan for the coming year. The elections for the board of directors are also held at the AGM. The other general meetings in January and May clarify and improve the action plan according to the current context.

Board of Directors
The RCLALQ’s Board of Directors (CA) is made up of 6 positions drawn from member groups as well as one position from the work team. The Board sees to the management of the organization and ensures consistency between the actions and orientations of the Coalition.

Staff
The RCLALQ staff are made up of salaried workers hired by the Coalition.

Committees
Committees made up of workers and activists from member groups as well as RCLALQ staff, working on specific topics. For example, the Mobilization Committee ensures the implementation of the action plan, while the Women’s Committee ensures a feminist perspective is represented in the Coalition.

National coalitions and groups of which the RCLALQ is a member:

The RCLALQ offers several training workshops to its members and to interested organizations to improve their knowledge of housing rights.

Workshop 101 “Rights and Obligations of Tenants”

This workshop is an introduction to the rights and obligations of tenants. It deals in particular with the lease, the right to remain in the premises, the termination of the lease, and the inspection of housing.

This workshop is intended to be a continuation of training 101. It deals more particularly with the calculation of a rent increase, the search for housing and discrimination, the security deposit, shared accommodation, and home insurance.

Workshop 301 “Evidence and Procedures at the Housing Tribunal”

This workshop focuses on evidence and procedures at the Housing Tribunal. It is aimed at people already comfortable in housing rights who want to improve their knowledge of housing disputes.

This training covers the establishment and application of municipal housing codes. It aims to deepen knowledge on issues related to unsanitary housing, the intervention of cities in such cases, and possible recourse at the Tribunal du logement.